Sheila Mccurry Highly Recommends Pompeii Surgical to Anyone Who is Interested. 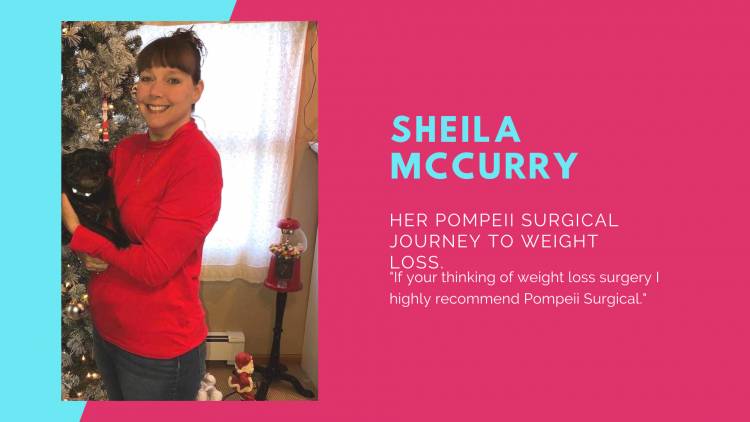 As a child, you already have a very fragile sense of self, and if you continue comparing yourself to those around you, it can be very damaging to the way you view yourself. Childhood should be about having fun, learning to make friends, and learning what life is all about. However, the lessons learned when you feel as though you are different than everyone else surrounding you are significantly different than those who "belong." Sheila Mccurry, throughout her childhood, consistently felt different.

"I struggled with my weight since I was about 13 years old. I always thought I was the biggest girl ever in my class. And as life went on, my self-esteem kept falling, especially in high school, when I felt every girl was thinner and prettier than me. Obviously, that isn't true, but your mind likes to play games with you, and you tend to believe it."

Throughout the course of her life, she struggled to do certain things or participate in anything that would draw attention to the weight that she was trying to pretend didn't exist. It is so easy to take for granted even leaving the house to go on errands that you don't want to go on. It isn't that easy for some to leave the house and not feel as though they are a walking sideshow. It isn't fair, but it is the reality for some.

"There are tons of things I didn't do because of my weight. I didn't try water skiing, tubing being a boat, didn't like to bowl because of my butt and the size of it, play pool, sit in certain chairs, wear certain clothes, you name it I didn't want to embarrass my self."

Sheila was another yo-yo dieter. Who hasn't at one point or another tried a fad diet, or a highly sought after weight loss pill.

"My weight loss on my own before surgery was like a yo-yo! At one time, I lost like 63 pounds on my own, but as soon as I got off from it, I would gain it all back and then some. I was always dieting and watching what I ate. It just seemed like the weight would always creep back one way or another."

Weight gain after losing weight can make one feel like a failure. It is a very helpless feeling. You try so hard to be healthy and lose weight, and then it comes right back. This can leave one feeling defeated, and lead to even more weight gain once that person seeks comfort for how they are feeling. It can be a vicious cycle.

"I felt like a disgusting person; I always felt sorry for my husband because he had to look at me, this 260-pound bag of flab as I would say it, and that's putting it nicely."

Sheila did not have the obesity-related health conditions that some have, but she knew sooner or later, her lifestyle and health would lead to severe ramifications down the line.

"I wasn't a diabetic, and I didn't have high blood pressure or any weight-related problems, BUT that didn't mean it would catch up with me sooner or later. I did have the normal body aches and pains from the weight and the mental portion as well."

Sheila came across Pompeii Surgical on Facebook. Thinking back on moments where she was simply mortified helped her make the decision to look up bariatric surgery.

"I was on a ride at a park, and the bar could only go down so far, and the attendant stopped to see if she could get it to go down further, and it wouldn't. I told her," that's as far as it will go!" The did let the ride go, but nothing like having eyes all on me."

Sheila was at her wit's end and knew she needed to do something. Her whole life had led to these moments of desperation, and she required significant change.

"I guess the turning point for me is when a few of my friends had weight loss surgery, and I liked the results I was seeing. I didn't want to be fluffy anymore. I don't like to use the word "fat." Lol. I was tired of having body aches every day or being out of breath, and I always hated to get dressed because I didn't like holding up my jeans or capris and see how big they were."

After deciding that Bariatric Surgery was the right choice for her, she began her research.

"Preparing for my journey, I did a lot of research and reading and talking and more reading before I stumbled across Pompeii, and I am so glad I did. Just prior to that, about a year before, I found a place which I can't recall and was going to have the surgery but was denied any loans, and of course, I cried because I wanted this so bad, but God had different plans for me. I'm glad he said no because I ended up going to Pompeii, and I'm glad I did."

She had no significant fears once deciding on Pompeii Surgical. She had made her decision and was confident moving forward that it was the right choice for her.

"I honestly wasn't scared at all about the surgery or even traveling out of the country. If its God's will for me to do this, then I'm all in."

Sheila had the ROUX N Y procedure done due to her GERD.

Ruth had her hernia fixed at the same time. She had a complication-free procedure and felt great afterward.

"Recovery was a piece of cake for me other than that gas. I think they put the extra premium in me. Lol. But I would just walk and walk and walk. I never got sick at the hospital. Now I did come down with bronchitis and pneumonia, but I'd like to thank the airports and the planes for that. Lol. My potassium did go low on me but I got in to see my doctor and I started liquid potassium and got it back up. I haven't had a problem since then."

After surgery, Sheila was having the time of her life with all the positivity.

"My first happy memory after surgery would be seeing the number on the scale go down and my clothes getting bigger. Or better yet losing my triple chins! Lol."

Sheila's health is fantastic, and she feels so healthy. She says she feels 100% better. She has so much more energy and doesn't feel the need to sleep as much.

"It's nice to be alive again."

Her experience from start to finish just reaffirms her initial decision to have her bariatric surgery through Pompeii Surgical.

"My experience with Pompeii from start to finish was phenomenal! I don't even have one negative thing to say about them. I had excellent care. The staff was well dressed, cleaned and so helpful. If I didn't understand something, the one nurse would talk into her phone and then have it translate in English to me. No one was ever pushy. I recommended this place to a friend of mine who lives in Ohio and she went and loved it. Now my cousin is wanting to have weight loss surgery and I am telling her about this place. They absolutely do everything for you, you do not have to lift a finger. And crossing the border was easy. The driver takes care of everything for you. I didn't even have to talk. If your thinking of weight loss surgery, I highly recommend Pompeii. Dr. Q gave me my life back, and he truly cares for his patients."

"I Can't Thank Pompeii Surgical Enough for Giving Me a New Outlook on Life." -Ruth...

"My Name is Nancy Reimer and I'm So Much More, than the...

WHY is Weight Loss Surgery The Right Choice for YOU

Helping you decide if weight loss surgery is right for you.