Our Patients Fears Prior To Surgery 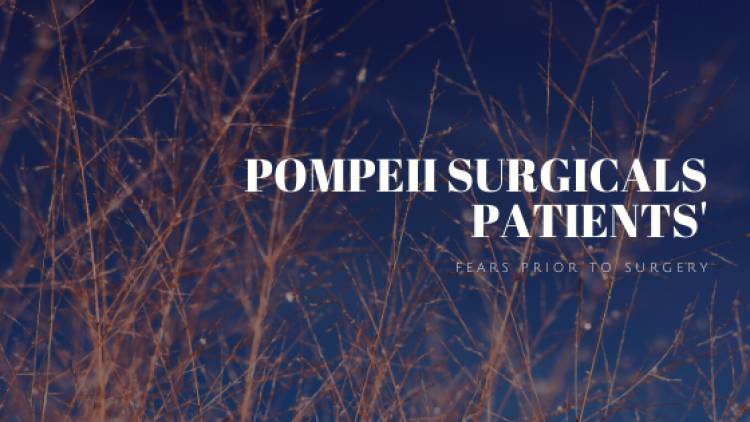 People come from different lives, cultures, and with different hopes, dreams, and opinions. The one thing that ties us all together is that we are human, and we have fears and concerns. We want to take risks in order to better our lives, but fear of the unknown is inevitable. Some are more anxious than others, but jumping into something without knowing what the outcome will be is not a comforting feeling. However, the most uncomfortable scary decisions can often be ones that help us grow the most and change our lives for the better.

Patients tend to have some of the same ultimate fears, but due to everyone leading different lives, there are differences in the things that they worry about.

"My biggest concern was, "will it make my hives worse"! I spoke with my allergist and other doctors, and I'm a lot of Chronic Hive patients, something drastic like surgery, pregnancy, etc. can at times shock the system and cause the hives to go away, but it can also do the opposite and make them worse. Luckily for me, I haven't had ANY hives since the Surgery knocks on wood."

"Right before my surgery, I was extremely nervous. Anesthesia scares me, and I was worried that I wouldn't wake up or that I'd wake up covered in hives. The doctors and nurse were there calming me down and being so professional. I ended up having some calming drops. I took a nap right before Surgery and felt a lot better heading into the surgery room. I had my fiancé with me the entire time, and he really made sure to stay positive and motivating during the entire trip."

Felicia was dealing with chronic hives, which not everyone has to deal with. It was a valid fear knowing that her system could make her break out in hives in random situations, and she couldn't control it or predict it.

Even knowing that she had this chronic condition that could cause complications she spoked with Pompeii Surgical, she spoke with previous patients, she researched, and most importantly, she had faith. She followed through with her surgery date, knowing that she needed to if she was going to change her life for the better. All it takes is just having some knowledge base, having faith that you are making the right decision, and pushing through the fear, and that is precisely what Felicia did, and she has never looked back.

"My concern was that without the surgery, I would continue to gain weight, and my risk for diabetes, hypertension, and cardiovascular disease was increasing. It would not be long before my body would succumb and be unable to fight off these diseases. These comorbidities would only make surgery more difficult and riskier if I waited."

Brandi had the opposite type of fear going into her surgery. She, of course, was nervous about the procedure, but she was more anxious about not doing the surgery or even waiting longer for surgery. She knew that she was on a dangerous path and that nothing was going to deter or fix her health problems unless she lost weight. Knowing that the surgery was the only option she hadn't tried, she knew it was the right choice. She, like Felicia, powered through, got her operation, and fixed her health and her future for the better.

"I was concerned about loose skin, hair loss, and possible complications. Those were the big concerns for me."

Most people going into this surgery worry about hair loss and loose skin. Also, complications are on everyone's anxiety list. The truth is the complication rate is so low that with a little faith and research, this concern can be easily worked through. Unfortunately, hair loss and loose skin can be a reality after surgery. Though fixable, it definitely is a side effect that one needs to decide whether or not it is worth it. Allison eventually concluded that it was worth it, and though still nervous had her surgery.

"I talked with each of them (Patients on the Facebook Support Group) about their journey. I was a little nervous about the side effects of the surgery and if I would feel the same as others did."

Megan had valid concerns about side effects and whether or not she would have the same side effects other patients had after their surgeries. But talking with people in her same position ultimately helped her decide whether or not surgery was the right choice. In her case, it was, and the Facebook Support Group helped her through those concerns.

"The only real concern I had leading up to the surgery was what the downtime would be after surgery and how long until I would be able to be active with my children. I prepared for the surgery by getting myself in the best mental condition I could."

Lacey was concerned about needing a lot of recovery time. As a Mom, the priority is your children, and she wanted to be present and not have a long time where she could not be active with her children. She prepared herself with research and the reality that she may need some recovery time. Ultimately she decided that the surgery was also a priority, and regardless of the outcome, she would be prepared.

"The removal of my lap band was my biggest concern. I had it for five years, and I was afraid something would be wrong that would prevent me from having the Gastric Sleeve."

In Sherrie's circumstance, she had a previous lap band. Not knowing if she would get all the way to Mexico just to be turned away was terrifying. Even though she didn't know what the outcome would be, she knew she needed to attempt it, and thankfully she went through with the trip and was not turned away. She had a successful surgery, and her story can be found in the Patient Experience articles on the online magazine.

"My journey preparing for surgery was filled with anxiety, nervousness, and contemplation, but with the help of Pompeii's Surgical Support group page on Facebook, it eased my mind seeing the success stories and all of the positive feedback. Though I was concerned about the side effects, the risks associated with the surgery, and if I was considered too big for the procedure."

Shandreka was another patient who found peace and comfort with the Pompeii Surgical Facebook Support Group page. Regardless of what precisely your fears are, there are thousands of patients on the support group page who are willing to talk about their journeys and help you with your worries and concerns. Of course, Shandreka knew that she would not know if it would all work out until she got there, but she did feel more at peace, knowing she had so much support and was not alone.

Logan Voorhis was another patient who struggled with the fear of the unknown. He had never had any type of surgery before, so he was concerned about the operation and whether it was a good idea to have a significant surgery for non-life threatening issues. He was worried about what the surgery would mean for his future and if there would be complications down the road, but he went ahead with the procedure and had his Vertical Sleeve Gastrectomy.

Some of Shawntrice Taylor's concerns where: How long will the surgery last? What was she allowed to eat, and how soon would she be fully recovered? How would she feel afterward, and would she need to take vitamins, and if so, which ones and for how long?

"I also wanted to know how much weight I could expect to lose, and how often should I follow up with my PCP? Would I require any further medical attention, what if something goes wrong during the surgery, just to name a few."

Out of Thousands of Pompeii Surgical patients, these are just some examples of concerns and results. You can find more patient experience articles on www.weightlosssurgerymagazine.com.

"I recognize the old me, but I'm glad he is gone." Jayson Maples Follows up With...

Suleiry Matos is Changing Things One Person at a Time by...

Melissa Davis tells all about her life and struggles with weight loss.

Tina Vogel Says: "Never underestimate what you can accomplish...